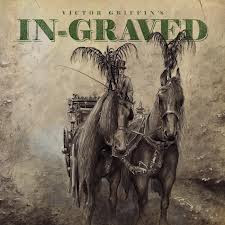 Victor Griffin (Pentagram, Place of Skulls) is back with a new record and band, including the old drummer from Trouble playing Hammond. It was recorded last year in Nashville and features 8 tracks. Thankfully he has toned down the Christian lyrics and instead wrote fantastic words to go with these powerful tracks, without focusing on the Christian GOD. Forget that and put the needle in the groove and let it rip. Digital Critic kicks into high gear with a monster riff. The organ is mixed barely audible on this track to just add some atmosphere. The mid section is really cool with some double tracked guitars. Actually this is the only song where they almost jam and really extend the mid section. What if, is slower but groovy and has very powerful lyrics. The organ is again mixed way in the back but you can hear it. The track ends with an acoustic guitar section. Late for an early Grave starts off with a guitar solo has a cool melodic driving riff. Side A ends with slowly with the track Fading Flower where for the first time on this side the organ is mixed a bit up in the mix to enhance the mellow feeling of this floating track. Nice..

Thorn in the Flesh has a fantastic and cool riff and groove. Victor is singing great and I love the flow of the riff and the organ. Very cool jamming mid-section on this track. Teacher is actually a cover of the old Jethro Tull song! Wow.. that was a surprise. It has a great heavy riff section that works perfect with Victor’s style. Awesome. Love Song for the Dying is another powerful one and the organ is mixed pretty high on this song, especially at the beginning since it is really low at times. A short guitar solo is played and the song slows but the heavy vibe remains. The record ends with Never Surrender is a fast pace melodic hard rock song. One of the most catchy songs on the record but also probably my least favourite. Victor has a solid new band and I look forward to seeing them at Roadburn..

http://www.svartrecords.com http://www.veritasvinyl.net
Posted by Scott aka. Dr. Space at 11:40 PM