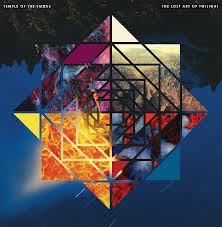 The cool instrumental band Temple of the Smoke from Belgrade is out with their first real release on the new Greek label Cosmic Eye. When I was playing gigs in the Balkans, we stayed at the apartment of one of these guys and they were super cool people. I really liked their first CD-R and it has so many different styles and the band maintain that on this record with nearly every song being unique and quite eclectic. There are 7 song in total. Kingdom of Apples starts things slowly and spacey with some floating synths, drums and bass and is a beautiful peaceful track that slowly builds up and gets really psyched out at the end. Moth of Time has acoustic guitars and a sort of spacey dreamy voice as the track floats and glides. Then you get quite a shock when the almost DOOM like guitars kick in. They return to the dream theme but then get really freaked out and noisy at the end. Starfall is a really short but intense track that feels like an intro to a dramatic scene in a movie! Out, into the Crimson Night starts with a synthesizer loop and layer that drives the piece at the beginning. All of the sudden it stops and a deep bass line kicks in as do the drums. This track is the only song on the record with a real guitar solo break and like rock and roll part. Every track on the record is quite unique in this way. Time to flip the record over now.

Street of Shifting Signs stars off side B with a fast tempo track with some cool bass lines but it is lead by a cool synthesizer solo as it slowly builds up. It later changes to a dub reggae part section including melodica and vocoder.  But wait, it ain’t over yet.. It really rocks out at the end and the lead synthesizer takes over once more. Amazing track. Beyond the wall of Sleep  features Jon Mack Marie on vocal. It starts with some sound samples and the dreamy voice and maintains this beautiful melodic dream like state. Temple of the Smoke ends this record and on the back cover for the record it has some words to go along with the track. Powerful lyrics. Just like the powerful words on the back of the record, it starts dark and mysterious as well. I very cool mid-eastern guitar line is played as well as the track builds and spaces out.
It repeats a similar theme over and over but it gets much heavier towards the end. Great record.
http://templeofthesmoke.bandcamp.com/
http://www.musicbazz.com
Web site: http://www.cosmiceyerecords.blogspot.gr/E-shop: http://www.musicbazz.com/products
Posted by Scott aka. Dr. Space at 7:56 AM