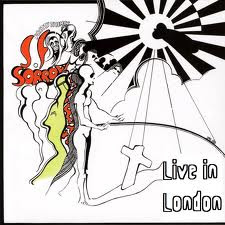 The Pretty Things released another single recently on the Fruits label but this one will go on sale August 15th. It features 4 songs (the first three from London 2010) and the last an unreleased track from Amsterdam 1969! Dick Taylor and Phil May from the original line up keep the band going. The 7" starts off with SF Sorrow was Born. If you were expecting the band to channel the vibe of the original you will be really disappointed in these live tracks but if you can accept the band as playing differently but still competent, then you will like it. She say’s Good Morning follows and this one is played with a lot of energy Flip the record over for side B and you get Baron Saturday. It has a pretty heavy groove this one and is catchy but lacks that psychedelic edge. The final track is only 2mins long. It is a cover of Renaissance Fair by the Byrds recorded in 1969. You have got to love the raw sound on this one. The 7” comes in two different colors and is pressed in 1200 copies and is pretty damn good just not psychedelic.
http://www.fruitsdemerrecords.com
http://www.theprettythings.net/