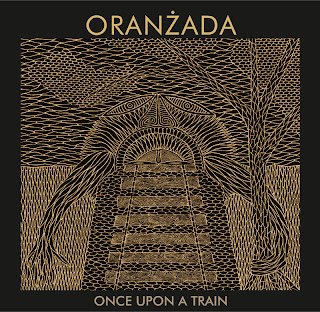 Oranzada are a five Polish group. This is the bands 5th release and it tells the story of a train ride between Otwock and Wawer in Poland with stops at 10 different stations (songs). The CD digipack is very nice with a cool booklet with all the lyrics in Polish and English. The key is that the CD is instrumental and you are supposed to read the words to yourself while the CD plays to get the full effect of the moods of the tracks and the connection with the music. There are 10 tracks in 30mins with a really nice organic sound production. The starting track Otwock starts with a whistle as the melodic guitar line and the rest of the bass, drums and band slowly come into the scene of the Otwock station. Swider is a short track focused on horns, flute, Jew’s harp and that wooden frog instrument. Józefów is a really cool track with a great bass line but it ends way too soon just as the melodic solo guitar is really got you hooked. Michalin features a strummed acoustic guitar and a nice lead guitar line. Falenica has a Spanish influence in the music and the guest trumpet part. Miedzeszyn starts with a drum box rhythm and a very simple and slowly developing wah guitar line that the bass and guitar change but again, the track ends in 2 mins. Radosc again features the trumpet and this track leads directly into Miedzylesie with a more intense rhythmic guitar, drum and some vocalizations as if something terrible and confusing is happening. Anin has a sort of mysterious like surf guitar riff and harmona that give it a cool feeling. Wawer is the last station and the band is now playing reggae in the only the 2nd track over 3 mins. The vibe is very different as the train ends it’s journey.

I think this is a pretty cool record but these tracks are simply too short. If they had taken these ideas and really developed them a bit more and just jammed out some of these great songs, this would have been a really fantastic record but it really leaves you wanting more all the time.

http://www.oranzada.com
http://www.lollipopshop.de
Posted by Scott aka. Dr. Space at 12:20 AM