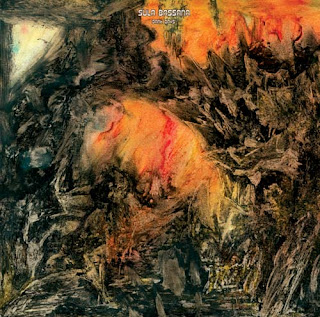 Sula (Dave) from Electric Moon, Liquid Visions, Zone Six, to name a few, is back with his follow up to the excellent “The Night” record two years ago. This record was recorded the same way as the last and also mastered by EROC. It features 6 songs in around 71mins and is released on CD and also double vinyl (marble or black). Underground is a damn cool psychedelic rock track featuring the vocals of David Henriksson, otherwise the entire record is instrumental. This is a quite catchy track but the guitar is really psychedelic and the extended guitar improvisation is just awesome and reminds me a bit of older Bevis Frond, both catchy and psychedelic. Departure is next and starts off with some synth sounds and then the guitars come in slowly with a repetitive riff that reminds me of early Hawkwind, with both the spacey yet very melodic texture and feel. A lot of spacey synthesizers on this one as well. Spaced out… Surrealistic Journey is just over 20 minutes long and begins slowly and features Pablo on the drums. IT begins with some really spaced out organ playing and guitar that builds up slowly, a bit like Electric Orange. The organ playing is super cool and I have never heard Sula play stuff like this. After about 6 mins or so, the guitar kicks in with a very cool solo on the right channel. It is a long journey but an amazing track where you will hear some 1969 Pink Floyd vibe, and lots of cool guitar as Pablo maintains the drum drive. Now for the title track, Dark Days. This is something completely different. It starts off with a really freaked out guitar and bass before a riff starts to develop. This sounds a lot like the jams that Electric Moon play these days until the mellotron like sound kicks in and totally changes the mood. I love the way this track flows from the heavy to mellotron parts. Damn cool. Bright Nights is another 10min space out that starts with delay guitar, organ and a simple drum beat but develops into a heavy Electric Moon style psychedelic trip. Arriving Nowhere is the 16min has a pretty funky space groove guitar that leads the way. Around 4½mins the track changes directions with this pretty cool electronic section with multiple guitar layers and spaced out sounds making it really psychedelic. Sula has made another fantastic record and it has very special artwork as well. It will look great on a gatefold vinyl.