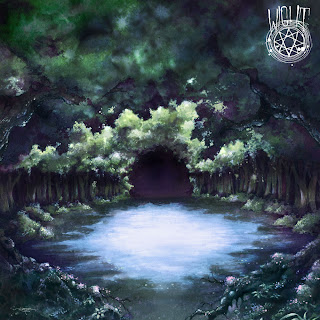 The German heavy rock trio, Wight are back with their 2nd full length record and it has a bit darker theme to it and not nearly as jammed or guitar oriented as the first. It features 9 tracks in 58 minutes and the band are channeling the same cool vibe as on the debut but have some new twists, ideas and cool additions to spice things up. The album was recorded live in the studio in August and November 2011 and mastered by Tony Reed (Stone Axe). The opening track, Kiss your friends Goodbye is has a very repetitive vocal line (My love will be your graveyard, kiss your friends Goodbye) as the song slowly builds with a nice wah guitar solo section in the middle of this slow pounding track. Just when you think the track is ending, it fades away and back up into a slightly different jam with organ for only 45 seconds and then is gone. I spit on your Grave is 6½ mins and starts with a slow build and then the drums take the lead before the major riff kicks in. The last minute the track really takes off. William Arthur Brown Jr. does the lead vocals on this track and also You. I prefer Peter’s vocal. Southern Comfort, Northern Lights is a 10min track with a really cool jammed intro with cool drumming and a slow building guitar solo line. The mid section is really cool with a great melodic wah guitar, saxophone and keyboard as well. Cool track. Half way to Infinity is an acoustic instrumental track. Master of Nuggets is another long one with a vocal and guitar that mirror each other as the bass and drums maintain the rhythm. The mid section is a nice jam with some cool guitar and then the guitar stops and it is just bass and drums before the guitar kicks back in. You features William again but Rene really rips it up on the guitar on this track, which is quite slow. The end becomes a sort of blues jam as the song changes once again. Big Dose is a short instrumental track as well that leads into On a Friday. This is a pretty short uptempo track but it has a dark feeling to it and it builds up with some multi-layered vocals in the last part and they vocals get really intense. I had hoped he would do some ripping guitar at the end but he did not. The title track ends the CD and it is an 8½ min instrumental track that really builds with some emotional guitar playing. I have not seen the vinyl yet but the CD paper sleeve is very cool with nice artwork and a large fold out booklet. A very different record from the debut but one that really grows on you.