My Brother the Wind and Flowers must Die- Moriska Paviljongen, Malmö, Sweden 7/14/12 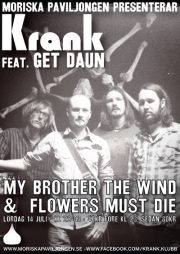 I had no idea how many people would show up on this Saturday night in the summer for some psychedelic rock music. I arrived in Malmo a bit before 9 and hung out with Pär and Jocke (Carpet Knights, ØSC) and we had some beers and heard some Magma, Made in Sweden and other music before heading over to the venue which is 5mins walk. ØSC, we had just played at this place but not in the big hall. This was going to be cool. The friends of Flowers must Die had set up old school overhead projectors and the classic oil bubbles light show. The DJ’s were playing awesome 70s rock, so I was psyched. I talked a bit with some of the people I knew (Stojs, Mattias, Niklas, Mats) and then the show startedou abt 23:30.

I guess about 100 people were here when Flowers must Die started. I did not know any of the material they played until the encore song, which is the really heavy on from their last record, that is a bit Hawkwind inspired. They played three songs and I filmed one of them. It was a short concert about 45mins total with the encore. The opening track was pretty cool with some great guitar. This was my 3rd time to see them and it was also very good.

It only took 30mins and My brother the Wind hit the stage. This was their first time playing together live since their new year’s eve gig. It seems before the gig, they worked out a few starting riffs but as you probably know this band is also all improvised music like Øresund Space Collective and Electric Moon. There are not many bands taking the risks to do this. Anyway, they played about 5-6 jams and played for about 80mins. Niklas only had his guitar and not the mellotron this time. Niklas and Mattias have great dynamics in their guitar playing. The visual guys kindly stayed and made really cool visuals. I shot videos of three of the jams and you can find them on youtube. Johnny, the owner of Transubstans records who released MBTW records was here but I did not get a chance to really talk with him. I just said hello. Good to see him out supporting one of his bands. Great guy… It was a fun but late night. Did not get home until 3 in the morning!