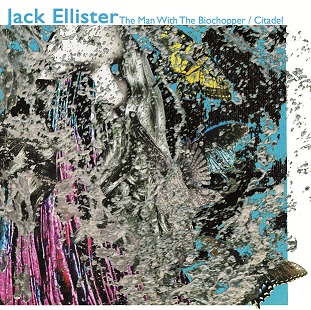 Jack Ellister is a young guy into psychedelic stuff. He had two previous bands, Angina Pectoris and Yordan Orchestra but now is out on his own and finishing his first full length record. The opening track on this 7”, called The man with the Biochopper, is to open that record. It is quite a special song with a really psychedelic and strange sound production. He plays a ripping solo. Far out stuff with a weird sound. Flip the record over and you have a pretty different take on Citadel by the Rolling Stones… Pretty cool but I think I still like the On Trial cover version best! This is a promising start for the LP. Tripped out! I really look forward to the full length record.  http://www.fruitsdemerrecords.com
Posted by Scott aka. Dr. Space at 12:29 AM