This is an exciting but also sad day as this will be the last concert that the legendary Danish psychedelic rock band, On Trial will play. While the band has not been that active the past many years, they were a seminal band in the Danish underground and many amazing groups have come out of the creative people that formed the core of this band, including Baby Woodrose, Spids Nøgenhat, Dragontears, Aron, and others. I first saw On Trial play here at Loppen back in December 1997, just 6 months after I had arrived in . I have been friends with the members ever since!
I showed up on my bike at 16:30 and could hear them soundchecking the drums. I dragged all my stuff up the stairs and went straight to work to set up the cables from the soundboard. It was a amazing weather today and very hot in the club. I was really sweating. One of the staff, a guy with really long hair, helped me out a lot. We tried to find a place with less vibrations and I also brought the cushioning foam (but it sadly was not enough). The sound check was great and everyone was in a great mood and doing well. After I was set up I went through all the hand made On Trial 7”s and choose 5 to buy for me and my Finnish friends. A lot of really cool ones.
The Technicolor poets were stuck at the bridge due to some sort of power failure so missed the soundcheck completely. They arrived around 20:30, I think. Sven, Anders, Henrik and Sölvi all went over above Nemoland to have some beers and sit in the sun and chill out after the dinner. Around 21 I headed back with Tom and Sally and Sven, the others had left a bit earlier. Everyone was in a good mood but with this weather I was wondering how many people would drag their lazy asses up and come to the show. A guy named John came all the way from ! 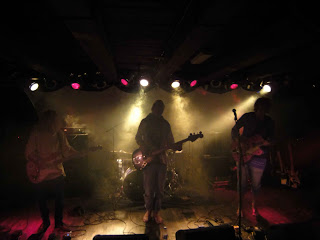 Technocolor Poets are a new 13th Floor Elevators inspired band from , and this is their 2nd concert in . They released a pretty cool record on the Kommun2 label last year. They did a quick line check at 22:05 and were playing by 22:15. There was not that many people here yet, which was a bad sign. This is a pretty cool and really young band. They seem to play all songs I had heard before even though I spoke to them and they said they had 3 new ones but perhaps they are the same that they played last time?? Their very last track was really cool. Nice band. 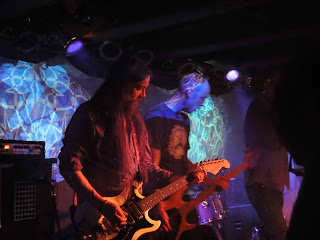 On Trial took a while and now I guess their was about 100 people. Thomas and Tommy from Gas Giant, Magnus, Dorte, Jemez, Lorenzo’s Mom, Lars from Bad Afro, Finn and quite a few others I knew were there. The sound was loud but very good and the band played a really long set for them. A good combination of older and newer material. They opened with Flashinghast and into a new one called Black Seagull. The classic Lovecraft was next. Cor Kill City Lights, Sölvi, a good friend of the band and former member of Mother Superior (Same band that the Swedish drummer used to play in) came up and did the guitar solo at the end. Cool. A few more more recent tracks and then Lorenzo joined the stage for some classic On Trial songs. He used to play drums but today was just singing with Bo (who sounds as good today as 13 years ago!) and playing tambourine. Blood Butterfly (they did not space it out much), Do you see her and Blinded by the Sun were all played. Next was a huge surprise, with Into the Void from Head Entrance. I am not sure they ever played this one live. Super cool and spacey as well. Lorenzo was back for Be forwarned, That’s Right (This totally rocked) and House is not a Motel by Love. They now, stepped back for a few minutes about about half the people stupidly left to go smoke or go outside but they were back in a few mins and started with a very cool space out with Kolos, a classic psych track from Blinded by the Sun. This was one of the absolute hightlights for me of the show and a lot of people missed it. Totally spaced out. 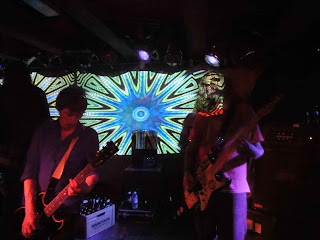 Now the set this was not really that set and they played some tracks not even listed like Parchment Farm. Anders (old guitar player, used to play bass in Baby Woodrose), he joined for some old numbers like Pot of Gold and Long Time Gone. Lorenzo was also up there and clearly really enjoying himself a lot! What great times this band had playing all over Europe and in the for many years and this was the last blast for these songs. was a great version. They ended with the Supersonic Spce bird with Lorenzo on vocals as well. I thought they were done but they did come back and play an old cover, Never been here before. The show was about 2hr and 10mins long. 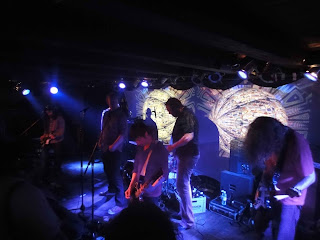 A really great show and the best I have seen since the early days when they were more spaced out and psychedelic but I had an amazing time. Sadly, we had some problems with the multitrack recorder due to sound vibrations and only about ¾ of the show got recorded. Bummer. A full audience recordering was made and a couple of people had video cameras and filmed different parts of it. I am sure some of it will show up on youtube. A great time with a great bunch of people. Nice visuals from Frank as well. Wow.. it was a really fun and great night and I met up with many new and old friends to celebrate this most excellent band. 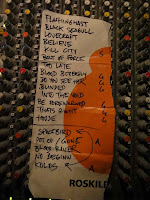 Set List: Flasghinghast, Black Seagull, Lovecraft, Believe, Kill City Lights, Bolt of Force, Too Late, Blood Butterfly, Do you see her, Blinded by the Sun, Into the Void, Be Forewarned, That’s Right, House is not a Motel, Kolos, Pot of Gold, Long Time Gone, Parchment Farm, Blood River, No beginning, Super sonic Spacebird, I have always been here before
http://www.ontrial.dk
See the best pics that I took at this link below: