Blood Ceremony- Living with the Ancients (Rise Above Records) 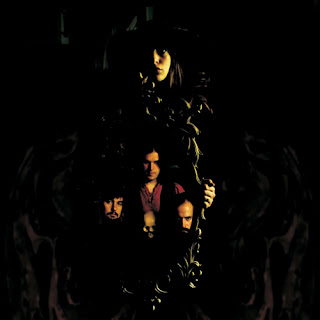 This is the Canadian quartet’s 2nd record and it was quite delayed in coming out. The gatefold double vinyl LP turned out quite nice. I was a bit bummed I did not get to see the band at Roadburn due to choosing to see another band. There were three great bands all playing at the same time, so what can you do? You must choose one. The record starts off with a short instrumental track with some nice acoustic guitar and flute, very folk oriented. This leads into Coven Tree which starts quite dramatic with a heavy organ sound and then some samples from a movie (I think) come in and the track takes off. This is a cool melodic doom track with a nice guitar solo and some great vocals. The Hermit brings the flute back and the vocal is quite spacey on this one. Musically it is a bit like Witchcraft meets old Tull. Fantastic song. Side B starts with an uptempo track called My Demon Brother and it has a long organ solo followed by a great guitar solo as well. Excellent track. Morning of the Magicians has a hard edge guitar riff that is nicely balanced out by the flute playing and melodic vocals. Wow. The flute playing is so much better on this LP than the first one. She has really improved a lot. Side C starts with the track, Oliver Haddo. It sadly fades out with a really cool riff and groove going. Night of Augury is one of the really melodic epic style tracks and reminds me one from the debut LP. Side D starts with a short intro piece with flute called the Witches Dance and this leads into a long track called Daughter of the Sun, a track with many sections. A great track to end this excellent record that tops the bands debut.
http://www.riseaboverecords.com  Http://www.myspace.com/bloodceremony
Posted by Scott aka. Dr. Space at 9:32 AM