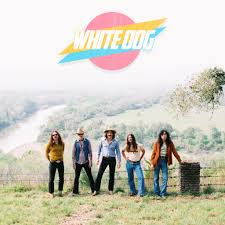 This is a new band from Austin, Texas. A five piece band with a sound rooted in the 70s.  I like most of the stuff released on Rise Above, he has a good ear for interesting bands.  This though is an album that took me a few listens to really get into it. The first time I heard it, I really was not that impressed but by the 4th listen and at a bit higher volume, I really started to dig the record a lot.  Side A starts with a short instrumental beginning and a cool southern Texas rock feel. It goes through quite a few sections including some harmony guitar parts and harder riffs before the guitar solo!  Black Powder slows things a bit and there are some backing vocals in this sort of slow bluesy groove. You can really get sucked into this simple one. Lanterns is also a bit more laid back a bit like Marshall Tucker Band with some dual harmony guitars as well. Snapdragon keeps the mood mellow and laid back. The vocals are sung in an interesting way and cadence.  The dual guitars for sure bring you back to the south!  Side B starts with Crystal Panther and a more rocking track and a good boogie groove. The singer has a quite unusual voice but he mixes up his style quite a bit. Abandon Ship starts off with a guitar solo before the vocals kick in.  This was a strange short track…  Pale Horse is more bluesy and laid back to start but then the story becomes more intense and so does the music.  Versus Cultus closes this debut record with the longest track of the LP and more of those southern harmony guitars!  Fans of Crypt Trip (good friends of these guys and mastered by Ryan Lee from the band) will enjoy this. Quite an unusual choice for Rise Above to release.