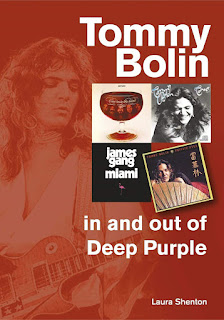 Tommy Bolin’s story is a very sad one.  An obviously very talented guitar player who was also a drug addict, that untimely ended his life at the age of 25. I have the music of most of his bands (Zephyr, James Gang, Energy, solo stuff and of course his work with Deep Purple).  I learned a lot about his early life as a drifter musician bouncing back and forth between Colorado and Iowa, where he grew up, in this book. I  have quite a lot of critic of this book though.  The flow is really bad and does not really have a clear logic.  There is a list of his concert dates but all of the shows in 1972-1974 are missing? It was just lazy not looking up the concert dates he played James Gang and Energy during this time period. Several are listed in concert posters and reviews, etc.. Also, Laura, does not seem to want to lay any blame on Tommy’s drug problems (heroin, coke, drink) in the break up of Deep Purple, when it was quite clear that HE was the problem.  The band had great chemistry with him and he could play the Blackmore stuff. They made a great and varied record together but he was a drug addict and did not get any help and this just lead to the band playing such erratic concerts (one night could be great and the next a disaster) and this was all on his shoulders.  Anyway… I learned quite a lot in these 90 pages of text.  A lot of the book, probably 40% is quotes from interviews and news articles interspersed with her commentary. There are concert ads, and some rare pictures as well as quite common promo shots for the big bands. In the end, it is not worth the 19 dollar list price but if you can find it cheap, you will learn something new for sure andit is a quick read!