Wow.. what a great night this was. I showed up around 7:30 to see if I could meet up with the guys. The WO Fat guys are fans of Øresund Space Collective, so we have talked before and got on great. Met them and the Mothership guys at Freak Valley. Anyway, sure enough, they had finished dinner and were hanging in the backstage room so I knocked on the window and one of the Doublestone guys came and let me in.

We chatted about life, music, Psycho Las Vegas, politics, and all sorts of stuff for a few hours. I had a couple of beers. Got to meet the new bass player Ryan, who also has his own band, Crypt Trip.  I went up into the club about 20mins before Doublestone were to start and was super surprised to see so many people. 200 pre-sale tickets for a stoner-heavy rock gig…  Wow.. this was more than Nebula was getting back in the day… Great crowd and I know almost know one! Lone, Mårdøn and a few others…. A whole new generation getting into it.
Doublestone played a short set of mostly new songs. They have finished recording a new record and this stuff was much more blues and 70s hard rock inspired and most of the songs they played were sung in Danish! They said the new record was one side in Danish and one side in English. They have recorded it now but have to mix it… Cool guys and the crowd dug it.. 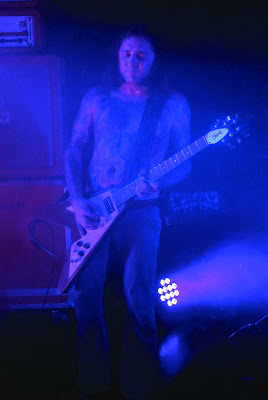 Mothership hit the stage like a hurricane! Kelly bring so much energy with his shirt off, heavily tattooed body and great stage presence. He was here to deliver the heavy metal riffs! They totally tore it up playing a mix of tracks from both albums like Elenin, Hallucination, Win or Lose (last track) and some from the 2nd record as well like Hot Smoke and Heavy Blues, Serpents Throne, and Astromancer. It was an intense 45min set. I had spoken to them a bit about jamming and stuff but they did not do any. They are a very tight unit! Smokin! The crowd loved it.

Wo Fat were on really fast since it was all the same gear, must have only been 20mins before they kicked things off with the Black Code. The band started off a lot of the tracks tonight with these slow and spacey intros before Ken would lay into the might riffs. What a killer guitar sound, so nasty and heavy duty. Reminds me of Billy Gibbons sound on the record XXX. I had not heard the new record yet and they played songs in a row from it and totally jammed and spaced out I think, Three Minutes. Ken was in the zone and the whole band really went out there tonight. I had never seen the band play so great. Ryan was killing it on the bass. He and Michael work awesome.. Good chemistry like they had with Tim. The Mothership guys also thought they really had some awesome and more loose and jammed out tonight. Crowd was totally into it as well. Anyway, the show was really awesome. I guess they played about 70mins or so, but I don’t really know as I was drawn into and right up in the front.
After the show I hung out and chatted with Ken, Ryan and Michael (Drummer) but also others. I was not home until nearly 3! Great night guys. Thanks..