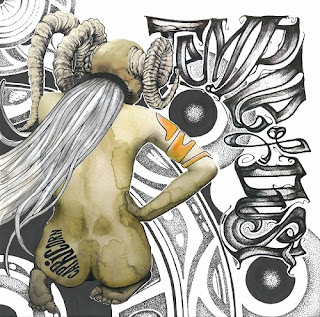 This is a really new band for me and some quite cool heavy psychedelic stuff at times. The band hails from Italy and describe themselves as a heavy blues trio! This album is a compilation of the two EPs they have had on bandcamp. Not sure if they are rerecorded or not. It has a powerful sound production. The LP starts off with the title track which has a massive affected vocal. I was worried if all the vocals were like this but they are not. Heavy, spacey and groovy but not very bluesy this opening track. Temple of Dust starts with a heavy bass line before the rest of the band kicks in for some heavy rock. Like the last song there is a bit of spacey guitar solo stuff but damn, it is just too short. Just as  I am drifting off with the track it ends and back to the same riff again.. Would be cooler with less repetitive riff and more space out. Requiem for the Sun has another very fuzzy and hard riff with some cool guitar effects. Blue Cheer, yeah!!! Szandor is a more experimental track that has a long vocal sample monologue running through the entire track and a nice melodic line in the background guitar and bass is played over the top. You can hear the sample clear enough if you really listen. It ends and the band, continue doing what they were doing before until the ultimate fade out. Thunder Blues has a more stoner blues groove to it and an intense vocal. Goliath is more bluesy as well and that intense vocal effect that was on the opening number returns. Intense. Lady Brown brings the Blue Cheer vibe back and an interesting middle section before returning to the main vocal theme. White Owl is the last track and totally different from all the others and focusing on just bass and guitar. A great way to end the album after such a heavy and intense 30mins or so. Phew..


http://www.phonosphera.com/?product=temple-of-dust-temple-of-dust-solid-white-180g-vinyl
Posted by Scott aka. Dr. Space at 8:52 AM