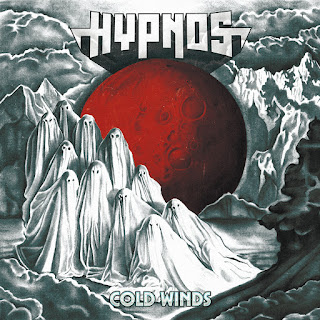 The Göteborg Sweden based five piece, Hypnos are back with their 2nd record. The band did quite a bit of touring in Europe to support the last record and according to the promo sheet are really prepared to take the world by storm this time. Start the Hunt kicks things off with a dual guitar attack before the 80s NWOBHM sound kicks in. I know they will hate the comparison but this does have a similar feel to their city mates (and probably friends), Horisont. Philip does not have as intense a voice though and he plays some flute on a few tracks including this one, where the flute and guitars do some nice melodies together for a short section before the dual guitars take over for the last section of the song with both guys soloing, switching from lead or a melodic line and then back.  Cool stuff.  I’m on the Run speeds things up and they even directly steal a section from Thin Lizzy before heading back into this high speed rocker. The Captive is a track with slower more melodic sections and then speedy sections. Some great vocals on this tracks in the slower part and again the flute reappears. Det kommer I Dag (There comes a Day) is sung in Swedish and a more melodic track with a real retro vibe to it as well. This is the longest track on the record so far at over 7mins. Excellent song. Descending Sun (Unrootables White) keeps the energy high paces but good melodies. Cold September was the song released last month as the first single. Transylvanian Nightmare is another fast hard rocking track with some great guitar work again. 1800 finished the album and is the most diverse song on the album with some really nice flute and guitar sections and longer jammed out solos. If you were a fan of the first record and like high energy, fast paced well played metal-rock and roll you will probably dig this.


http://www.facebook.com/hypnosboogie
Posted by Scott aka. Dr. Space at 8:52 AM