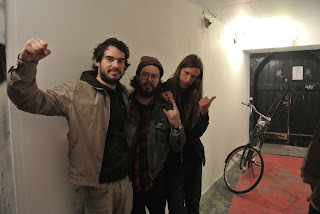 I had only planned to go by and say HIGH to the guys but we had such a great time when I arrived and it was so cool to see them all that I hung out and I am glad that I did. All the guys in all three bands were super cool guys. We had some beers and talked about music, life, travelling…..  I spoke to all of them, especially Jack, the bass player. Matt and Nick at great guys as well. Nick has moved to Berlin now so they have a stronger base in Europe. They have a lot of friends in Copenhagen after they toured with our local band, Pet the Preacher. Also, their visual guy and graphic artist, Adrian lives here!

Anyway, I had never heard the Pittsburgh, PA band Carousel before and they were really excellent but too loud. There was not that many people yet when they started at 21. They opened with Jeweler’s Daughter, a powerful opening track. The next track was excellent and they did a lot of trade lead guitar between the lead guitarist and the singer, who also did about a third of the lead guitar. I filmed the next song, Buried Alive.  The new drummer in this band is totally awesome. He really hits the drums super hard and grooves like hell. He also sings back vocals. It was a good variety of tracks. They ended their set with the title track from their new album, released last Sept, 2113. Cool 70s rock stuff.

Mondo Drag, from Oakland, CA, were next and now there were a lot more people. They are a five piece band with two guitars (one also plays an MS20 mini on a few tracks), keyboards (he sings lead vocals), bass and drums. I was surprised to see like 150 people on a Monday night!  I had seen the band at Roadburn 10 days ago but only caught the first few songs as we went to see Diamanda Galas, who I felt I might never get another chance to see, whereas the chance to see these guys was much higher. They started off the show with some very organ driven tracks. It was the same as at Roadburn from what I recall but then they really started to diversify the set with a super cool instrumental track with a bit of a mid-eastern feel to it. I wish I had filmed this one but I filmed the next song. The band plays the songs pretty straight and don’t really jam or improvise at all but have great songs. The last song, Shifting Sands was really cool but they ended it when they should have really jammed this cool groove out. A great band but I wish they would let loose a bit and experiment more. Super nice guys. I talked a lot with Alejandro. 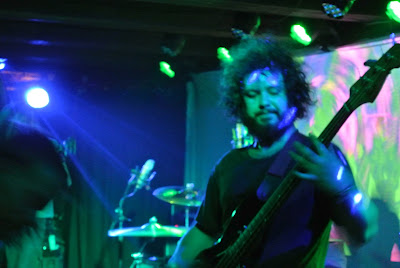 Elder were up and on the stage really fast and opened the set with a new Jam number. The band had a different set from when they were here from last August, which was nice to hear different and new songs. Sadly, the show was not one of their best as during the 2nd songs a drunk guy smashed down on the stage on Jack’s bass side and killed the step up converter so Jack had no pedals now and had to just plug his bass directly into the Ampeg now. He was not happy. The bass sound was still totally amazing. Actually, Lars, the soundman did a totally killer job last night as all the bands had amazing sound but damn it was loud. My phone dB meter said 113 dB. Anyway, Legend was thrown into the set (Adrian who was doing the visuals said he had not expected that one!). I filmed the track just before the new one. Legend, maybe? Sanctuary was the new one, I believe. IT was a good mix of songs from the different albums. Crowd was really into it but they did not quite have the groove or something tonight  but still an excellent show.  Great guys…. All the bands.. I had a really fun night.