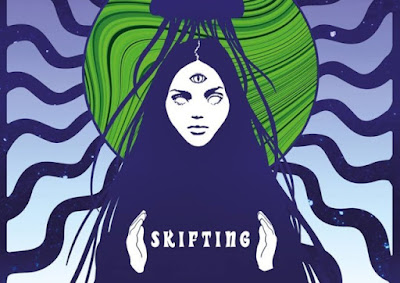 Skifting is a quite old Danish band. I saw them in the late 90s and again a few years back at Kildemose Festival. They have not had a new album since 2014. Kasper, from Måneskjold played and help to push the band into a heavier psych are for a while but he does not play on this record. The current line up is: Uffe Ejlerskov - Vocals/ Guitar, Emil Deleuran Poulsen – Drums, Ask Lindquist Ejlerskov – Guitar and Hans Windeløw – Bass.

The record is quite short and features 6 songs.  The title track is first and quite psychedelic with a bit of an effect on the vocal and some quite heavy guitar parts at time. IT starts fast and heavy with one melodic riff. It slowly starts to space out with some cool effected guitar. All the vocals are in Danish. In I Spind is a short rocker, while Vinters Bid, brings things down with a bit of mystic dark vibe to it before it gets heavy and psyched out with a nasty fuzz guitar and riff. At times is the heaviest track on the album but also the most spacey. Great dynamics. Flip the record over for Udkantsfærd.  This is a mid tempo track with a nice melody and some powerful bursts of guitar, a bit like old Bevis Frond.  Drengens Væk starts very melodic and and then gets quite heavy and intense and then back to the melodic parts. Then there is a really long psychout like On Trial or Spids Nøgenhat would do. Cool record. Wow.. I had not expected this.

Fans of other Danish psych bands like Spids Nøgenhat, Dragontears and Måneskjold will dig this.