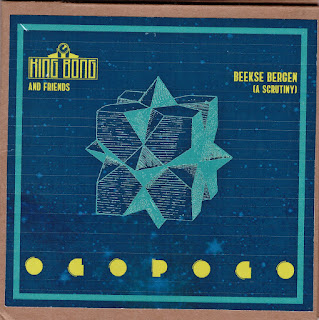 King Bong is an Italian sort of stoned jam band, who have made a number of releases. I have reviews quite a few of them and I met one of the guys at Roadburn and he gave me this new CD-R they have just released.  It is quite different from any of their other releases. 2017, saw the bands first vinyl release with Sand = Return (which I have not heard yet).  The band is a three piece but on this adventure they are joined by Chris Haskett (guitar) and Rosarita Crisafi (saxophone played from the European Music Orchestra).

“Beekse Bergen is an ongoing project inspired by a magic land beyond the Alps. Every iteration is a different route through the park, every stroll a different story. Mythical encounters abound in these adventurous expeditions and danger lures behind every corner. “

The band camp site is up to Vol 5 and Jam XV. The CD features 3 of these, each represented by a symbol on the CD so I don’t know how they match up to the numbers on bandcamp. Anyway, the first track starts with a slow build up with some lazy saxophone, just slowly working the groove. A lot of exploring going on here. A bit like Sunburned hand of the Man at times. Several times the track nearly dies out and I thought it was over but the journey keeps going. Just before 20mins, it starts to get really funky and out there with intense playing by all and then the track nearly dies off. At 23mins, something is stirring again and around 25mins, it sounds a bit like a synth but it must be a guitar.  At 26mins, a riff starts up again, a dark distant, doomy sort of one, with an ominous nature to it. A bit of push and pull from the sax and guitar, bass, as the drums crash down every now and then.  By 30mins we are in yet another world as the jam moves on and finally ends. Symbol 2 starts uptempo straight away with some direction it seems but not really. It nearly dies out and then you get some back and forth with each person playing for a few seconds then stopping and making space for the next person. It ends a bit over 12mins and then track three starts with some nice bass playing and then the rest of the group start to add to jam but by 3 1/2 mins, we are back to just bass and drums. Around 6 mins they are playing about with some harmonic stuff. No sax on this jam until nearly the very end

I have to say these are some strange jams.  Some people will get it and enjoy while I think others won’t have the patience or the commitment to hear them out.  Check it out.

http://kingbong.bandcamp.com
Posted by Scott aka. Dr. Space at 4:09 AM