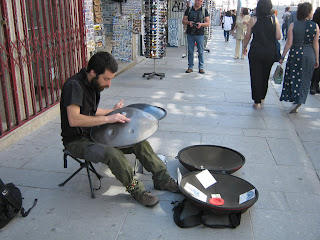 Handpan solo is a project by a Porto street musician named Sergio. I saw him playing in the streets of Porto when I visited recently.  He has two of these handpans, which are a bit like a mix of a drum and a single tuned gong or harp.  They are limited in the sense they are tuned to one key so you really have to be creative. He was amazing. Wow..  I bought his CD_R for 5€.  IT features 9 tracks between 4 and 12 mins in length.  Some have this almost mystic, eastern, Moroccan feeling of sorts. Beautiful music. At the end of the CD are a couple of other tracks with acts that Sergio has played, one called Adducantur. Check him out. I wouldn't mind have him playing on some of my next solo material or to learn how to play one of these myself!