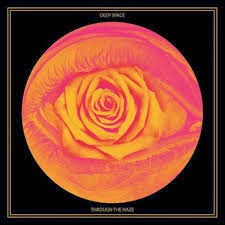 Deep Space is another new band for me. The 3 piece are from Austin, Texas and have previously released and EP called Cosmic Waves. The band has a new cassette out now called Berlin as well. This album starts off with the uptempo and really spacey song called Work. The vocals are mixed in a very psychedelic way while the space sounds float around. It has a bit of a Wooden Shjips like vibe but not the same sort of hypnotic groove, more an acid rock jam style. Vibrations is a 11 min track with a similar vibe to the first track and it is quite stoned and features some great brain tingling guitars to fill in the psychedelic landscape. Inner Light is a fun sort of psychobilly track with organ and a Elvis like vocal at times. Flip the record over and Motorcycle takes us on another trip, starting off with a spoken word piece of a really slow building spacey track. Lady Heroine reminds me a lot of White Manna from California. Overall, this is a really psychedelic album with a really cool feel and vibe and a nice variety of tracks.

http://www.sulatron.com  http://deepspace.bandcamp.com
Posted by Scott aka. Dr. Space at 3:26 AM