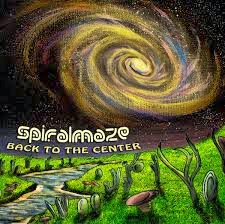 Spiralmaze are back with their 2nd release of mostly instrumental Ozric tentacles inspired music. This is a private release by the band on CD. It features 7 tracks in 40mins (so maybe it comes out on vinyl??). The CD starts off with the excellent Multiuniverse starts things off with a trance techno like synth line and a very fast drum rhythm and a guitar solo right out of the Ed Wynne handbook. Hwang Ho has a really nice bass line by Aris mixed up front and driving the this track. It also features more guitar solos than the previous track and a guest one by Stel Andre.  Remipede has a riff that is very close to an Ozric song but which one (Vita Voom). There is a vocal sample on this track that sounds like a Middle Eastern singer. The synths are very nice on this track as it floats and spaces for a while and then the guitar riff changes and slowly morphs into the solo section as the track builds up, which features a very melodic solo. Myraid Small Creatures has a sort of reggae skank guitar riff to start things off and lots of nice synth layers. This track featues some additional percussion by Vangelis Kalatzis and another vocal sample. This is a lovely track. The Longest Day is next and split into Part 1 and Part 2. It starts very spacey with lots of floating synths and a bit dreamy. They might even have a Novation supernova like Ed as the synth sounds are quite similar. Part 2 picks up the pace and it takes a while before the guitars kick in and the groove is very tight and funky. The delay guitar is really cool that goes along with this track. It really speeds up at the end and Ed Wynne like guitar returns with a really cool wah guitar solo. The title track, Back to the Center ends this cool record. It starts off with some drums with some effects on them, some vocal samples and a tribal like rhythm before the dreamy synths and bass line roll in. It gets quite heavy at the end. While the band is very Ozrics inspired they use some more heavy metal style riffs on some of the songs like Remipede, which is very heavy at the end. Fans of the Ozrics, Quantum Fantay, and Mantric Muse, will probably really dig this album. I think it is better both sound wise and playing that the band’s first record.