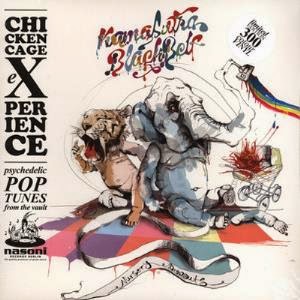 The members of the Polytoximaic Philharmonie are back with another Chickencage Experience CD. I really enjoyed the last CD/DVD release. This one is a bit more focused with shorter tracks and more singing and less instrumental parts. Mayday Sister Mayday starts things off in a mid pace with some nice saxophone and great singing by HM Fishli. It starts to rock out with some short bursts of lead guitar and lots of complex movements and the end reminds me of Blood Ceremony with a slightly doomy, heavy guitar riff. Top Secret is a short 2½min song with a synth line that gives it this dreamy feeling. Werküken tells a story up until about 3½ mins when it changes direction but then leads to a fade rather than a jam or something. Shaken not Stirred sounds exactly like it would be perfect in a James Bond film. Done to perfection.. Thousand Miles in nearly 8mins of melodic floating progressive style rock, with nice layers of synths, sax and occasional guitar solos but the song is again very focusing the singing. Still flaky but Free features a bit more instrumental sections and nice interaction between the keyboards, sax and guitar. Spacecop Goodbad is a short funny track. Hope Song has some nice lyrics and beautiful guitar lines. An Ocean full of Gold is a really short one that leads into the CD closer, Whitewash, which is one if not my favourite track on the record. I love the guitar playing on this instrumental. A pretty cool record once again and it would be perfect for a James Bond movie….

http://www.nasoni-records.com
Posted by Scott aka. Dr. Space at 1:57 AM