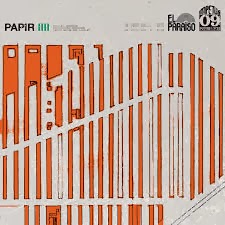 The all instrumental three piece band from Copenhagen are back with another new record to start off 2014. While the band are not very creative with their album or song titles, they make up for it with some really cool music. As with all but their first record this one is once again recorded, mixed and mastered by Jonas Munk, who also plays synths on the album side long track 3. They are not really breaking any new ground or territory with this record but if you have enjoyed their musical trips you will really dig this record for sure as you get sucked in right away with the opening track, Papir IIII.I, which is one the band have been playing at most of their live shows in 2013. The track starts softly with a nice bass line from Christian before Nicklas takes the lead with some really beautiful guitar. The track has a beautiful mid-section that leads up to the intense ending. IIII-II is 9½ mins and it amazes me how this band creates this spacey vibe, beautiful melodies but also this musical tension. Great album side. Flip the record over and prepare yourself for the 22min track simply called IIII.III. It starts with a long fade in and then the journey begins. It slowly builds up and then comes down in the middle to a section with just bass and guitar before it creeps back up. It gets really psychedelic at the end. Jonas’s synth parts are pretty subtle throughout but most noticeable in this section. Hope they play this track live. Another cool record. Keep it up boys!

http://www.papirband.com http://www.elparaisorecords.com
Posted by Scott aka. Dr. Space at 8:04 AM