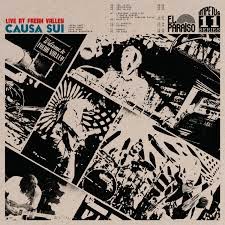 Causa Sui are a four piece instrumental psychedelic rock band who originally laid their roots down in the mold of Colour Haze but gradually over the years have really developed a really unique and person sound and feel to the music. While I have been able to see the band many times here in Denmark, the band rarely plays live anymore. Luckily, the Freak Valley Festival captured this excellent and rare live performance and the band mixed it for our pleasure. The set is heavily focused on the bands last record Euporie, where half the tracks come from. The versions are pretty close to the record with a little improvisation but not much. The song lengths are almost identical to the record. Side A starts off with The Juice and Homage from the new record. Red Valley is one of the bands favourite tracks to play from the Summer Session’s series and Jonas just plays great guitar. Rasmus’s keyboard parts tend to be mixed a bit higher on this live recording which is cool.  Side B starts off with two of the three parts of the track called Manifestations of Summer, where they play the first two parts- Lonesome Traveler and Santa Sangre. On the record Venice by the Sea ends this piece but here they exchange that for Garden of Forking Paths (the only track from the Pwet’R sessions). It starts quite dreamy before the monster riff kicks in there is some cool keyboards from Rasmus to compliment this. The rhythm section of Jakob (drums) and Jess (bass) are just awesome. These guys have been rocking for more than 10 years now. Anyway, the track develops into the most psychedelic stuff on the entire record with the band just out there for a few minutes before coming back to earth. Mireille ends the side and again is from the latest album Euporide Tide.  Side C starts off with the grooving track El Paraiso and a long guitar solo as the track builds up. Rasmus gets a quite nice solo section and Jonas plays beautiful guitar while the track comes down. Euphorie is 11 mins and has some great bass playing and drums in this track that is a bit more jazzy but has great dynamics and also killer. Now to the final side, which starts off with Homage. The guitar riff and sound you could say is a Homage to ColourHaze but the organ changes the vibe a bit and a different kind of melodic thread runs through the track despite the riff being CH inspired. Soledad ends this 90 min concert with a very uplifting track that for sure left the audience in a great mood. A must have release.


http://www.causasui.com http://www.elparaisorecords.com
Posted by Scott aka. Dr. Space at 5:40 AM