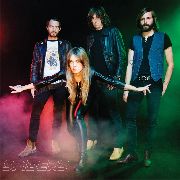 Spiders are the Swedish band from that features Witchcraft/troubled Horse guitarist and used to feature Axel from Graveyard on drums but now they have a new guy Richard Harrymon. If you are lucky, the first 75 copies of this 7” come with a limited edition 20min live DVD (with Axel) from Truckstop , a club in Göteborg. Anyway, the 7” starts off with Fraction.  The cover of the Alice Cooper classic, Under my Wheels is much faster than the original and Ann-Sofie is having to really like shout the vocals rather than sing. It was ok but not nearly as cool as the original. The DVD is really well shot and edited but the sound is not that good, with the guitar far too low and just a poor definition of the sound except the vocals. It is cool to check out for the 20mins that it lasts and gives you a taste of the raw energy of the band. Cool release.
http://www.myspace.com/wearespiders
Posted by Scott aka. Dr. Space at 10:25 AM