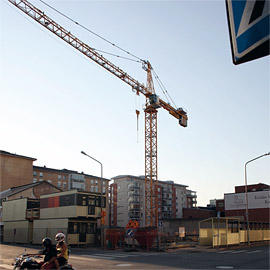 Circle has returned with their 4 or 5th release this year. This is an older recording from 2005 from and is a very inspired two song concert where they performed with Träd, Gräs och Stenar from . Side A is the 20 min long, Satatuhatta. I think this is a really cool piece and Mika is in top form and I love the delay on his voice sometimes. It even features some harmonica but not one is credited on the record as playing it? To me, this piece represents is like psychedelic kraut rock opera for the space cadets. Amazing emotion in his singing as the piece slowly builds up over time and is very intense. There is even some spaced out guitar soloing which is pretty rare for Circle.  Wow.. Side B starts off with a very fast section that the band would use a few years later but this does not last long before they start to go into some repetitive and spaced out areas of the universe. They return to the fast section again at the end. This track is 19½ min track that has a similar effect but a bit of a darker feel to it. I was really impressed by this record. Damn cool stuff…
http://www.circlefinland.com http://www.ektrorecords.com
Posted by Scott aka. Dr. Space at 10:08 AM