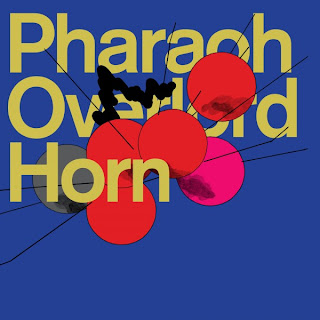 This Pharoah Overlord vinyl record was recorded live at the Space Force 1 festival in in 2010. The band released their set from 2009 by Circle last year, where my band, Øresund Space Collective played the day before. The concert starts with a cover of the song Revolution by Spacemen 3. It is a very very very repetitive guitar riff that sounds slightly like You shouldn’t do that by Hawkwind but it just goes on and on for a bit too damn long. I am not 100% sure but I think all the stuff on this record is new material. Laibela is next and lasts 11 mins long and a bit more rock and roll but also the same riff over and over and it has some singing but it is not mixed in much of a way that you can really understand him at all. I think it is Janne. This track becomes some sort of psychedelic metal track but it is all abit too repetitive and the drums are nearly completely drowned in the guitars and vocals at the end. Crazy sound. Very psyched out. Side B starts with Solar Stomp and is a sort of acid rocker of sorts and the vocal is clearer and you can make out the drums a bit more on this track. Sky is totally insane! The band is just so spaced out and crazy on this one. The sound is really mixed in a far out way that just sort of fries your brain. Insane record… The vinyl is really a beautiful sleeve with gold inlay on the back and front. A nice gatefold. I think it is pressed in only 500 copies so get one soon.
http://www.circlefinland.com
Posted by Scott aka. Dr. Space at 10:20 AM