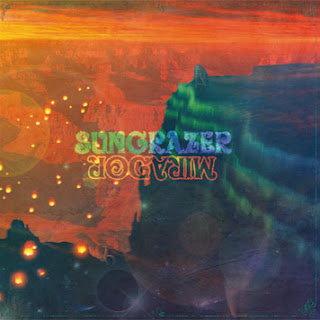 The Dutch band Sungrazer is back with their 2nd record on Elektrohasch. The CD has really nice artwork and a large booklet with lots of pictures of the band in and out of the studio. This album features 7 songs. Wild Goose starts things off and the band enters the CD with a slow jam like feeling before going the singing starts. The track has some really nice spacey guitar at the end but the band doesn’t really take it anywhere. Octo is more like the hard hitting stoner rock the band is known for and this is a pretty short just over 3 mins that might sound like Rotor playing on Colour Haze’s gear and tuning. A very good track. See is an 8 min track where the band return to the Colour Haze sound and vibe. The track starts very slow with a relaxed vocal and the band slow it down to an almost complete stop in the middle and it is very spacey and cool. I like the sound a lot here with the delay guitar, I just wish he would take it to the next level but they don’t. The Colour Haze bass line comes into dominate the next section and they put an effect on the vocal and it reminds me a bit of QOTSA. The end is a bit more psychedelic with the way they mixed the guitar. Goldstrike is a slower and track with a bit heavier guitar riff. Behind is a long 12 min track that sound so much like Colour Haze: the bass sound, the rim snare, slow melodic hypnotic vocal, the build up and then the massive guitar riff (a bit more distorted and nasty sound than Stefan). They give it a bit more of their own twist with the spacey delay guitar that floats over the sound. Very cool. The main riff section is not interesting though and has been heard on a dozen Colour Haze songs. The next section is really cool and spacey with a couple of layers of guitars. I like the transition when the shaker comes in and then they return to their CH style again. The title track, Mirador is next and starts with drums and some spacey delay guitars before the bass line slowly enters the scene. The track builds up but then comes down and is very space again at the end like the beginning and has a very cool surprising strummed guitar mixed in at the end. Nice. 34 and more ends this CD and is like a mix of Colour Haze meets Motorpsycho. I think the hand clapping stuff is a bit strange in this one. The band has made a pretty solid record and fans of Colour Haze who like something more spacey, will dig this band.
http://www.sungrazer.nl  http://www.elektrohasch.de
Posted by Scott aka. Dr. Space at 10:18 AM