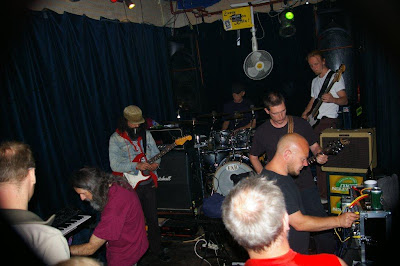 This was the 2nd time we played in one of the worlds smallest clubs, Sub071. Why in the world would we drive 750km to play in a place that holds 30 people? Well, because it is a very cool underground place and the people who run it and show up are really really cool. As was the last time, we were stuck in traffic in for some hrs and what should be an 8 hr drive turns into 11 hrs! Jack and his gang have food and drinks for us, which is really cool and we are not too late. We set up and then Max Headroom set ups. We have some food and beers and listen to Max Headroom. I could not get into the room to see them and take a picture but damn, this was a cool instrumental band playing psychedelic stuff. Very cool organ driven space outs. The closest band I could compare them to would be Uran! That is how special it is. Cool stuff.  I am not sure what time we started to play, I guess around 11 and we played for a little more than 2hrs. Some people had driven or taken the train from and the north of to see us as well. Cool. I think we played a pretty damn cool and psychedelic concert and the people were packed into the place and enjoying it. Magnus was on fire on the guitar this night. I think the best track of the set was the very last one of the concert, so maybe we needed to just keep playing. Usually we take set breaks but we played just straight for 2 plus hrs and then called it quits. A quite fun night. Check out the pics and the recording at the links below.
http://www.archive.org/details/OSC2011-07-21.FLAC
Posted by Scott aka. Dr. Space at 7:49 AM