Siena Root- The Secret of our Time (Made in Germany MIG02212) 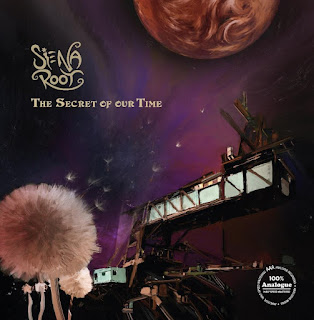 Stockholm based Roots Rock band, Siena Root is back with their 6th studio album.  The new album features 5 guests, friends and old band members. This time the lead vocals are shared between Zubaida Solid and Swedish blues star Lisa Lystam (Lisa Lystam Family Band). Some of the guests featured are Stefan Koglek (Colour Haze) and KG West aka KG Westman, previous core member of Siena Root. An old friend of the band, Stian Grimstad (who will also be on the tour with them) plays sitar, Lisa Isaksson adds some flute and Johan Borgström also plays guitar.  On some of the songs both singers are featured and on others, only one sings. The album starts opens up with Final Stand, which features some really powerful vocals (mixed pretty loud and in your face as well!) but a great rocking number after a spacey lead in. The middle section also features a really interesting spaced out interlude followed by the return of the main riff and chorus. Siren Song features that Deep Purple like organ on this slow footstomper which has a nice organ guitar battle tradeoff in the middle. Organic Intelligence is a great song and I love the video (see below).
Mender features some great vocals (all the tracks do, really) but I like the slide guitar and drive on this track. Real classic 70s rock and one of my fave tracks on the record. In your Head is a bit more heavy with a nice wah guitar to start before the  vibe changes and the organ takes over. A bit of a jam to start this track which is cool. Nice harmony instrumentation on the mid section of this song and a bit longer organ solo than on most tracks.

Side B, the band stretch the songs out a bit more and start off with When a Fool wears a Crown. This one will get the audience going live with the great intro organ and powerful drums. It also has a very catchy sing along!  Daughter of the Mountain slows things down with a nice blues vibe. Have no Fear lets Sam and Love start things off as the slide guitar slowly joins and the groove takes off. The vocal is complimented with some nice guitar or organ in between as the smooth groove flows. This jam fades out slowly over 30 seconds to end this great song. Imaginary Borders is the last and longest track on the album and starts with flute and organ. This track has long instrumental section. They could jam this one out live for sure. That is it!!

Not sure what is up with the cover artwork?? I have to say I really don’t like it at all and can’t see how this fits with the vibe of the record or band?? Bizzare…. But the music is great!