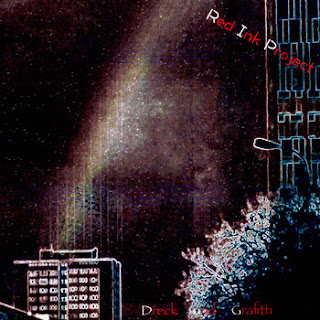 Red Ink Project is a new project from guitarist Holger Jendis and his friends (Gordon-drums, Magnus-bass and Bernd-Flute) in Berlin. Holger gave me this CD-R at the ØSC concert in Berlin and I had also met him on the Spaceboat a few days before. Very nice man and they make some pretty cool music. The CD features 6 tracks in a little over an hour. The music is quite experimental, searching, floating spacey. The opening track, Shukuhachi, is very dreamy with some flute, bass, guitar and the drums don’t come in until half way or so.  Daybreak features a lot of trippy guitar and effects.  Euphoria features some really spaced out stuff going on. A sort of groove starts to develop but not what you would expect. Some far out panning also happening at times in the mix. Quite original piece of music and rocking out at the end. Miku has a long 3min space out before much happens and then a nasty guitar rifff changes the mood totally. Around 5mins the drums kick in and a slow pace leads things forward with the main focus still on the distorted guitar for the rest of the track but some nice bass lines are played as well. Dreck is 15mins long and takes quite a lot time to really get going, with a lot of experimentation going on. This track is a bit more multi-layered with some synth like stuff going on as well. Graffiti is the last track., also another long one over 13mins.

The band have 10 releases on bandcamp so there is much more music to explore.

https://redinkproject.bandcamp.com/
Posted by Scott aka. Dr. Space at 7:28 AM