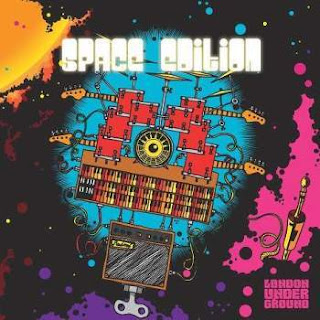 This is an old Italian band started back in 1998 and lead by keyboardist Gianluca Gerlini. They have released 4 albums. Three released on Musea and the first one on Record Heaven. This double LP features their last album, Four as well as compilation of tracks from the first 3 albums.  The features quite a few covers including the great high energy opening number Fanfare by Arthur Brown. They go for other classic 60s tracks as well like Dharma for One (Jethro Tull), Queen St Gang by Arzachel, Can’t find the Reason (Atomic Rooster) and Ellis Island by Brian Augur). Their original songs are a mix of instrumentals and some with vocals. Some great energy and cool 70s vibe to it all. Sound production is also really organic.

Four, their latest studio album features 7 songs and a jam. Only one cover but another Brian Augur track, Tropic of Capricorn.  This record is totally instrumental and mainly focuses on keyboard solos complimented with some nice bass playing, drums and occasional guitars or saxophone.  If you are a fan of truly keyboard lead, proggy, a bit jazzy stuff, then this is fantastic. Billy Silver is an excellent uptempo organ driven track. At Home is a quite spacey track with some nice Richard Wright inspired synths. Three Men Job gets a bit jazzy with the sax addition. The Comete is a shorter piece. What I Say takes the pace up with a driving drum and more in your face keyboard. Bass line grooves and then some more sax is played as well. Ray Ban is a short 3.5 min funky track. This one could have gone on much longer for me. I was really getting into it. The jam is a more trippy piece and also one of the more harder rocking and one of the only tracks you can really hear the guitar well. Great stuff..

This is released in 350 copies on purple vinyl. I think this one will sell fast. Quality stuff. The CD was released by Musea last year and the band released it on vinyl themselves. Not sure how many copies were made.