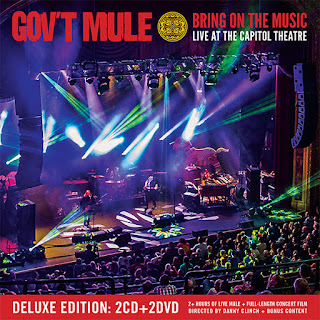 Gov’t Mule just released a new double CD or 4LP vinyl album. This concert was also filmed and released on a Blue Ray. The LP, CD and DVD have different sequences. The album was recorded over two nights April 27-28th, 2018.  IT took them a year to put this amazing set together. It was mixed by Geordie Johnson (Big Sugar) and produced by Warren Haynes.  IT has a great sound and of course the band are in top form, as always.  The album is a complete mix of songs from every studio record spanning 8 vinyl sides. The DVD features a couple of extra tracks.  Amazing that the band is celebrating 25 years now. I remember I went with my friend Carl to see Gov’t Mule at the Paradise Lounge in Boston in Sept 1994. IT probably their 5-6th show ever, something like that.  They totally blew us away. They were just so powerful.  The new music was awesome and the cover songs just so heavy.  Well, 25 years later, this album showcases the bands music, as there is only one cover song (only on the DVD, not the vinyl), and one that they have rarely played since the Woody days! This is rare in a Gov’t Mule set as some killer covers is just a part of who the band is. Well, Warren is still amongst the best songwriters around and they play quite a few songs from the latest, Revolution Come, Revolution Go record. A very solid and incredible set, well worth being released. Check it out..  I have only heard the 8 vinyl sides but not watched the DVD yet..