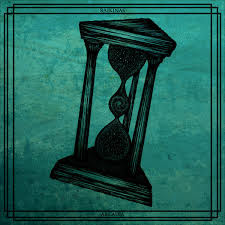 This is a band from Sardinia, Italy formed in 2011 and with three albums released. The four piece band has played with a lot of stoner rock bands in the scene (and I guess Duna Jam!).  Anyway, the album features 7 tracks starting off with Klepsydra. Classic stoner rock groove with a sort of shouted vocal as the band powers on. Some nice guitars in the break. Later the track slows things down to a doomy crawl and the vocal comes back again on this long track.  Rokka continues with a straight up stoner riff and groove. Volcano has a cool effect on the guitar at times and starts slow but then rocks out but later spaces out and later gets very repetitive, so be patient. Interlude I is a strange spoken word thing that ends side A. 17 January starts side B. Some nice spacey guitar on this track and classic stoner riffing as well. 21st June has a bit too much of the same singing and riffing but a good energy. Idyllium is a cool song a real change of pace with a really beautiful melodic start and a nice laid back track. Interlude II is another strange one with some almost like throat singing that leads into the song, Oracle. This track probably has the best guitar playing on the record and starts very relaxed but builds in a great way. The track also features some organ.

The band has a great stoner rock sound and groove and mix it up with some nice guitar parts. I did not like the sound production on the record as it has a quite loud and dry drum sound. Stoner rock in Italy lives!!!!!!