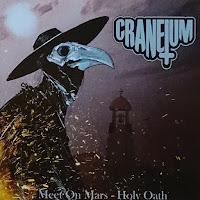 This band comes from Turku Finland and has been around since 2011. Both of these tracks come from a previous release (never on vinyl though!) called Explore the Void. The 7” starts off with Meet on Mars. This is a heavy riffing (no solo) stoner rock track with slower breaks and good dynamics and a great sound production. The singer has a cool voice. Holy Oath has a sort of punky frantic pace and a more spoken word like vocal to start. As the track evolves it kicks into a more stoney groove with some cool wah guitar.  This 7” comes in several colours and a great fold out artwork sleeve. Cool stuff.