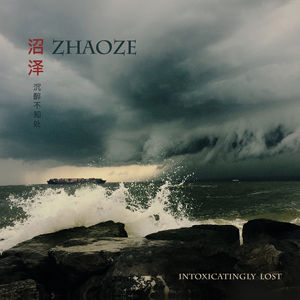 Zhaoze is a Chinese instrumental four piece rock band playing dreamy post rock style music. Very western inspired but with some unique twists here and there. This is their first release outside of China. The CD features 9 tracks in just over 60mins. Most are new but a few are bonus tracks from older releases. The opening song, the Worthless reminds me of the Japanese band Mono. Hoyliang plays Gugin (ancient string instrument), Xiao and dreamy keyboards, Littledream on guitar, Roy on bass and Seasean plays drums and glockenspiel. See you in the Dusk starts with a droney dreamy bowed sound and a cool lead bass line. Really nice playing and band interaction on this track. Falling Leaves is a slow track with one of the Chinese instruments taking the lead. Around 2mins the drums kick in and the energy level changes a bit and just before 4mins heaviest guitar on the whole CD kicks in and goes into Pelican like territory. 1911 3rd Movement sounds like a traditional classical music track but it is not. It has this dream drone synth mixed way in the background and the Gugin taking the lead, I think. The Youngstar fishing for the Stars (Great title!) is another mellow floating dreamy piece until that quickly strummed post rock lead guitar like line kicks in.. not real rock lead guitar but way to overused by western bands. Lonely Shadow would Dance (another great song title!) starts off with flute (Xiao??) and then a sort of trade off between the guitar and Gugin. Beautiful track. Sleepy Child Sweet Smile has a more spacey vibe to it and some cool effects and another beautiful melodic thread and nice use of the Glockenspiel and later Xiao (flute?). Into your Dream features some really cool bass playing. The title track is last and the longest one at over 12mins and one of the best songs on the CD. If you are fan of the post rock music genre and love these sort of sweet dreamy  movie soundtrack theme type music but done in a very elegant way, please check this band out.