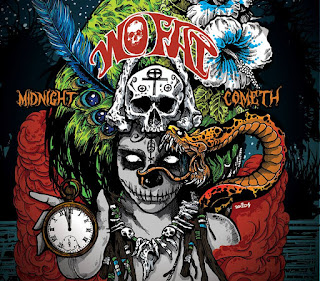 Wo Fat is back with a new studio album and a new bass player as well. Last year they released the Live at Freak Valley record and this was one of my faves, which I heard a lot. I was excited to hear what they might do next for this studio album and man I was not disappointed. Their recent show was so killer and featured 3 songs from the record. The LP opens with the killer There is something sinister in the Wind.  A great heavy opening riff and then a really great groove kicks and then Mr.Stump lets it rip before the vocals kick in. I like the extra drums on this one and then the long solo.. Michael and Kono (replacing Tim) have the killer groove down leaving lots of freedom for Ken. Great stuff. Of Smoke and Fog starts with just Ken spacing out with some nice delays on the guitar and later cool delays on the vocals making this one of the most psychedelic tracks that band has made.  Side B starts off with Le Dilemme du Detenu, which has a really hard riff and a bit doomy at times but then when you think they will kick into the Wo Fat groove, they go out into space instead and then the groove! Really cool lyrics on this track (by Michael!).  Three minutes to Midnight comes out the gates fast with some ripping guitar and another great set of lyrics on this track, which is one of the bands faster tracks but this one slows down with some cool solos and nice added percussion parts. Amazing track. Nightcomer is a more slow and stoney, doomy track to start and then some great soloing. The whole band just kills it on this release.. Amazing record..