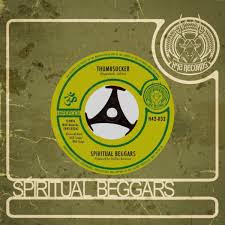 The Swedish band, Spiritual Beggars recently released a new studio album and it appears they had a bit of extra time and energy to record two cool cover songs (they do appear on the deluxe Mediabook version of the new records Sunrise to Sundown). Thumbsucker (Felix Pappalardi- Mountain) kicks things off and is more organ driven than the Mountain version. Great guitar solos as you must have if you cover Mountain! They could have jammed it out a bit more but it is a 7” record…  Stoned Woman by Alvin Lee (Ten Years After) is next for the B-side. I really love the groove on this one and nicely sang as well. Great single.. There are 450 copies on Brown (80), 150 on green and 220 on black vinyl. Quite simple artwork.. very old school..