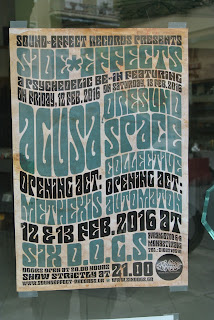 This was a double concert weekend arranged by Yiannis from Sound Effect Records in Athens. Agusa on Friday and Øresund Space Collective, with most of the members of Agusa on Saturday… Different opening acts each night. We arrived around 13 on Friday flying in from Copenhagen and went straight to an apartment that we could have for the entire weekend. Super cool people and we all hit it off right away.  This place was 2mins walk from the Acropolis. Amazing.
The hosts took us out for an amazing lunch with squids, anchovies, sardines, greek salad, bread, fish.. beers, etc… amazing food. We were so hungry. We went back to the apartment and rested for a while and some went out to walk around and then over to the venue for the soundchecks.   These all went fine and around 20 they started letting people in. Both bands were being multitrack recorded and video taped with 4-5 cameras.

Methexis was a 4 piece band, with guitar (he did lead vocals), drums, bass and keyboards. They played some pretty intense art-prog rock stuff that reminded me a bit of Marillion at time but they also slipped into jazz and other stuff as well. The place was pretty packed with people, around 150 people I think.  I was resting my back and ears so I heard most of the set from the backstage upstairs. They also had some cool visuals. The audience seem to like it but you could tell they really wanted to hear Agusa.

Agusa hit the stage about 10:40, quite late as the other band had a lot of gear to move and arrange, etc…  Agusa pretty much had the audience in the palm of their hand from the start and the band played a blinder of a concert. Wow.. Mikael is the leader and dictates the changes, solos, improvs and directions of the folk prog the band plays. Jenny is just a great addition with the flute and gives the band even more of a folk sound. I think sometimes the folk melodies of their songs are quite similar and you almost think they are repeating a song they already played but it is long passages with great guitar solos, great keyboards and very dynamic bass and drums. The flute is layered over the top and here and there. They played about 80mins I think and the audience loved it.. Great apprecitation. They sold a lot of Merch..   I should say the sound guy was great and the sound was amazing for both bands.

It was a late party and some of the guys did not get to sleep until 5 in the morning! I crashed at 01:30 but was up early at 8:30 and went out for breakfast before anyone else was up and over to the Acropolis museum, which was just around the corner. That was cool. What an amazing historical site.

This was a pretty relaxed day and some went around and others just hung out and we headed over to Sound Effect Records and what an amazing record store. If you are trying to find any of the records from European psych, heavy, stoner, spave rock labels, everything was in this store. I was totally blown away. Highly recommended!  We hung out across the street at a small bar/restaurant and had some nice food and beer and at 17:30 we went to the venue to meet the Automaton guys and do a sound check. Everything was very slow and took a long time but the sound checks were great and it was so cool to finally meet the Automaton guys since I recorded some stuff for their last record. We played most of the set at the soundcheck and it sounded super heavy and spaced out. Wow.. So much louder than the ØSC sound check.

Anyway, doors did not get to open until 21 so Automaton started late. We started with a spacey instrumental piece that lead into the mid paced Mount Ida! Intense track…..  the next one was a total killer though, when we played Going Down. This is the one I did for the record and I had a blast with them live… Fucking killer psychedelic doom band…  The set ended with a very heavy version of One of the Days by Pink Floyd.. About 45min set and people were into it.. I had a blast.

Set List: Space Intro jam (10mins), Mount Ida, Going Down, One of the Days
ØSC did not start until nearly 11 and sadly, the place was not as full as the night before but the people here were really dedicated. We played a super high energy show. Tim was just kicking ass on the drums. Johan was coming up with some killer riffs and Jocke just grooved..  Jonas was great but had a rough time hearing his own keyboards. I had not used a couple of my modules for Automaton so I could mix up and come up with some different sounds than before.  It was great and I think we did 6 jams in 85mins. We could have played one or two more but Mikael felt we had done our job and did not really want to play anymore. Pity. I would have liked to do one more but in the end it was the right decision as I was blasted and had been on stage for nearly 4 hrs if you include all the sound checks..  It was fun to meet the fans and sign some autographs as well.  So cool to play in Greece. Hope we make it back again. Thanks to Yiannis and Emilios and all the music fans in Greece.

You can hear the ØSC concert at the link below