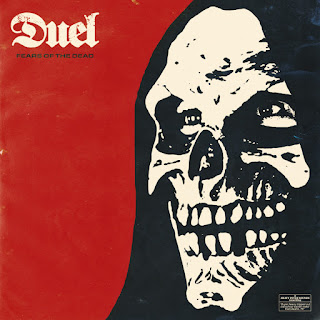 Duel is a new quartet from Austin, Texas.  The CD features 8 tracks of some groovy rock and roll. The title track starts things off with a great stoner rock groove that they return to after several different changes in the middle with a short guitar solo section and another cool change and then they return to the theme that started it all off. This Old Crow is a short track starts with a more intense in your face guitar before the let it loose with a nice groove. These guys dig Clutch and Pentagram, for sure. Nice moods on this one. The Kraken changes the pace and mood as it starts to build up into a monster of a track. Tom (guitar) has a pretty cool voice. Shawn (bass) is also listed as vocals though. Some nice ripping guitar going on at the end of this one. Fell to the Earth has a real footstomping groove to start things off. Lots of good movements in this track. Side B starts with On The Edge. Electricity is mostly another mid-fast paced track which slows down on some of the vocal parts. A bit Pentagram like perhaps? When the Pigs are Fed is one of the more intense musical pieces thought the vocal is pretty laid back. The band always comes back to the foot stomping groove though. Locked Outside closes this Texas-clutch-groove-pentagram-witchcraft rocker. The last track is actually my favorite on the record as it has so many cool dynamics, a great solo, some acoustic guitars, floating spirit and heavy stuff too. Pretty cool album..


http://www.heavypsychsounds.com/
Posted by Scott aka. Dr. Space at 9:10 AM