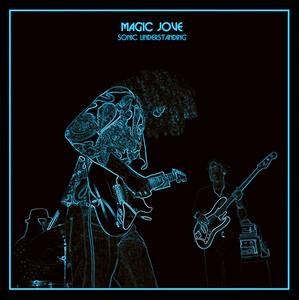 Magic Jove is a new Swedish trio from Malmö. The drummer Tim, also plays in the band Agusa. This is the band’s debut 10” record and features 4 songs. It is pressed in only 300 copies on black and blue vinyl.  Black Clouds in Western Skies starts things off. Filiph has a really cool bluesy voice for being such a young guy. He also plays the bass guitar. The band reminds me of early 70s Robin Trower without the Hendrix guitar sound. Don’t drag me Down is next and it has a nice groove. Track you Down starts with a nice guitar and passionate vocal leaning on Bruno’s bass lines. The titles track ends this excellent 10” that sounds straight out of 1974! Another bluesy one and someone breaks out the harmonica for about 15 seconds here and there. Nice guitar solo work also. Hope these guys develop into a band that will jam live and explore their songs structures even further. I really look forward to hear the full length record by this great new band.

http://www.magicjove.com http://magivejove.bandcamp.com
Posted by Scott aka. Dr. Space at 8:30 AM