Sun and the Wolf- Salutations (World in Sound WIS-3024) 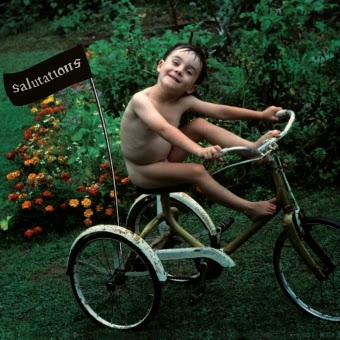 This is a new band for me but they have a catchy groove and remind me of Spirtualized or early 90s Sundial without the great guitar playing. They are a quartet originally from New Zealand but moved to Berlin to make their mark on the music world. The band has previously released one record, called White Buffalo. I really dig the opening track, 87 years, such a cool groove and sound. Settle Down has a more dark vibe and is one of the longer tracks at nearly 5mins and has some drone synths and some conga in the mid-end groove section and some guitar but not that interesting compared to the rest of the sound. Great track. ! All we Need features a real 60s fuzz guitar and vibe but still have floating feeling. Ghetto Drum is a slightly slower piece with these slightly more spacey vocals and guitars. Waves  in front of Me has a some cool layers of fuzz and wah guitar as a heavy deep bass line pushes the track as the vocals put you in this ethereal world. Into this Mess starts off like a jam with a lazy bluesy, psychedelic guitar as the groove gets more catchy and melodic vocal develops to follow the guitar or the other way around and then they have a bit of a jam and space out but the guitar player only teases and never really just kicks ass and plays a massive solo.. only toying with us, sadly… This is probably my favourite track with the opening one but still under 5mins. The Fisherman starts with a loop and then the drums and bass kick in and then the vocals and happy vibe. Why are we not Fading is one of the more hard rocking tracks on the CD. Never Sorry finished off the CD and is another of the more melodic dreamy tracks. A lot of this CD I liked a lot and some of it was bit too mainstream dreamy pop rock stuff but fans of Tame Impala, Spiritualized, and the 90s UK psych-pop scene should check these guys out. They write a lot of good songs.

http://www.worldinsound.de https://sunandthewolf.bandcamp.com/
Posted by Scott aka. Dr. Space at 10:44 PM