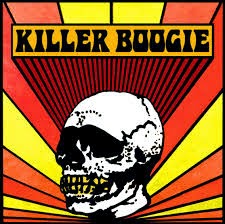 This is a new Italian three piece band that stoner, 70’s rock, more than Boogie but have delivered a really solid 9 track LP on the Heavy Psych Sounds label. Bad Rebel kicks thing into high gear with a more garage rocker before heading into Riding the Wind, which is a mid-paced track with some cool spacey sounds like mixed in on Brain Pyramid and Black Rainbows also on this label. The band has at least one cool guitar solo in each track. My Queen gets a good groove going. Little Flower is a more hard rock groover that can really suck you in. Silver Universe was a great laid back spacey track that leads into the UEMG inspired Cosmic Eye, which is one of the longest tracks and has a slow spaced out movement in the middle before building up again with a really cool effected guitar sound. Summertime, is a happy track to shake your ass to. The vocal is mixed a bit further back on this one for some reason. A happy track! The Golden Age reminds me a lot of Nebula and Fu Manchu.. Dynamite ends this pretty uptempo with a classic stoner rock tradition… This was a really cool and enjoyable album and if you are fans of Radio Moscow, Brain Pyramid, Black Rainbows, UEMG, etc.. you probably get into this bands groove and rock and roll, straight up, no surprises, done with class and style..

http://www.heavypsychsounds.com http://facebook.com/killer-boogie
Posted by Scott aka. Dr. Space at 10:58 PM