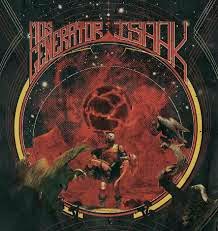 This is the first new material from Mos Generator this year but I am sure not the last. The three songs here are quite different for the band and they were all recorded back in 2008 for an aborted album. Tony plays some keyboards on the opening track, which he says was inspired by the movie Altered States. Time and Other Theives Tony says was inspired by VoiVod and has had a number of versions layers added at different times but he has stripped a lot of that back for this final version of a song he is happy is out to the people now. Outlander has hardly any guitars but is a beautiful spacey track lead mainly by the keyboards, simple bass and drum groove. Very cool floating vocals.. This material is unlike anything you have heard released under the name Mos Generator but cool tracks, so who cares? The Issak track is only long 15min track with a lot of different moods. It starts off slow and a bit spacey with some long spoken word speeches by the crazy preacher, Jim Jones. Far out stuff but it sets a cool vibe for when the stoner rock riffs kick in and it gets heavy. I quite liked this track and they return to the same theme at the end where the song started. A pretty cool 30min record… The record has really nice details about all the songs by both bands.

http://www.heavypsychsounds.com
Posted by Scott aka. Dr. Space at 10:47 PM