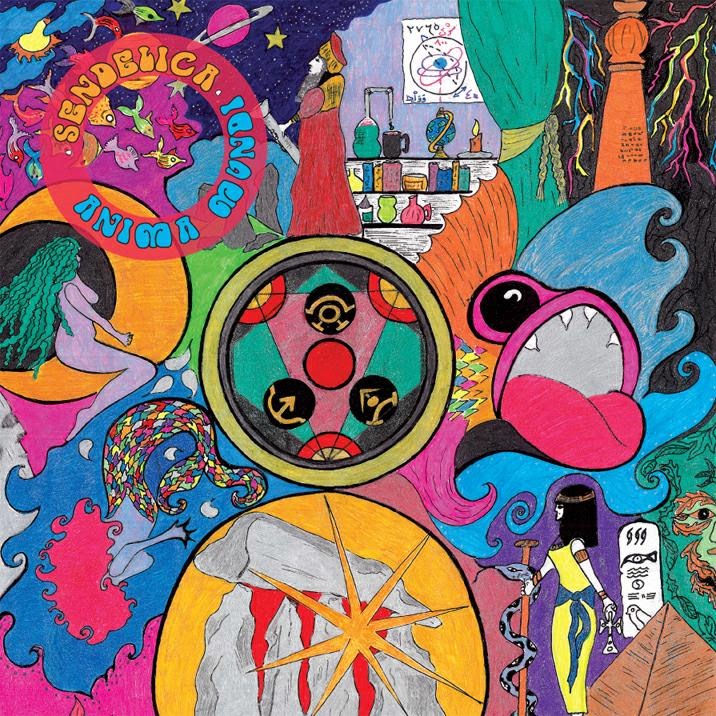 Sendelica, the Welsh psychedelic space rock band, will have a new record out in early 2015 called Anima Mundi. It will be released on in many formats including, vinyl (diff colours), CD, DVD and some sort of box set. The record features 8 tracks and starts off with Craeft Worker. It starts off with some electronics and synths before reverb guitar and rest of the instruments kick in. the programmed drums gives it this strange artificial sound as the music floats and glides. Quite a long psychedelic floating piece. I love the horn solo. Master Benjamin is a more uptempo track that reminds me a lot of GONG when they are energetic. Some really cool guitar, sax and just high energy space rock… Great long song. The Pillar of Dehli is very spacey and I half expected Daevid Allen to start to sing a duet with David Gilmour.. That is the vibe.. Azoic is a slow building floating track that leads into the more rocking Baabek Stones which starts off with a really cool wah guitar solo over what sounds like programed drums and bass. A bit later the saxophone with a long delay comes in to take the track in a different direction as the programed stuff ends briefly.  The Breyr is another long track and has a pretty heavy guitar and pretty much stays as a long guitar improv over the other instruments. Some beautiful synths at the end of the track. Searohwit is a dream piece and totally synth based and features some piano as well.  The Hedge Witch ends the record in a mellow way also and is mostly synth based. I was surprised that the record was so electronic based but there is still some really great stuff here with lots of different moods for everyone that likes spacey music.

http://sendelica.bandcamp.com
Posted by Scott aka. Dr. Space at 8:50 AM