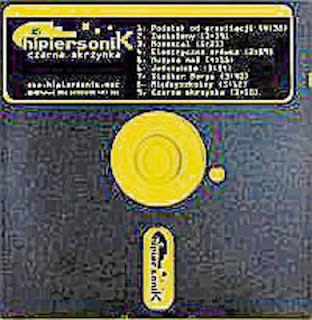 Hipiersonik is a band that I saw opening for Hawkwind in Liverpool. They are a 3 piece band of saxophone, drums and a guy with a sampler. A lot of stuff is sampled. The guy on the sampler also provides the spaced out vocals. The music is a mixture of techno beats, mostly melodic spacey rap or vocals but with some cool drumming and great saxophone. Some nice piano is featured on some of the songs as well. It is quite a mixed back of electronica. The 10th hidden track is actually a short pretty cool version of 21st century schizoid man by King Crimson. Check out their web site. The CD comes in a cool 5 ¼ inch floppy disc! If any of you remember these?

http://www.hipiersonik.net
Posted by Scott aka. Dr. Space at 9:55 AM