I had to see Hawkwind on the Warrior on the Edge of Time reissue tour where they would perform the entire record in it’s entirety. Sue and took the train to Liverpool and spent the afternoon on the Magical Mystery tour, which took you around to all the historical Beatles sites in Liverpool, then we had a nice Indian meal and headed to the venue around the corner. The place is upstairs and holds a bit over 1000 and it was quite an intimate small place to see Hawkwind. Stage was pretty small for them and all their dancers. When we came in about 19:45, a band from Poland called Hipiersonik was just starting. It was a mixture of some pretty cool jazzy, electronic, GONG like stuff with more electronic stuff with rapping that I did not really dig so much (like the video I shot. The song before was really great). I think they played about 45mins. The 2nd to last song they played as a short crazy version of 21st century Schizoid man (King Crimson) and that was really cool.


Hawkwind hit the stage just before 21 and it was really hot in this place now, even though it was quite cold outside (8C). They opened with an old Calvert poem and straight into Master of the Universe. The soundman was working on the sound as it was a bit out of balance, with Dibs standup bass being the loudest instrument drowning out all the guitar. Dibs voice was clearly hurting after 5 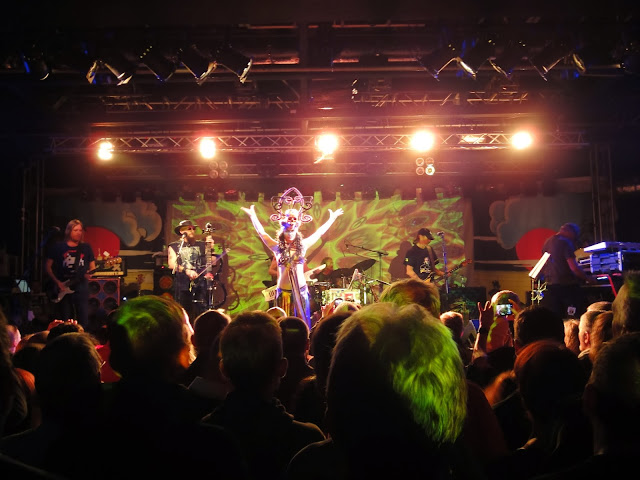 nights in  a row and was sounding pretty rough but hanging in there. Steppenwolf was next and a big surprise for me and Dibs played the main frontman (well, he is basically the voice of Hawkwind these days) and actor. The Hills have Ears is the best song off Onward, so that was cool to see. The dancers and the projections were really cool but they guy doing the main lights had these blue lights going straight out into the audience and it totally bleached out the visuals and was quite annoying. Southern Cross also off the Onward record and then they went directly into the complete Warrior on the Edge of Time. It was great to hear this classic record live and I enjoyed it so much but I was surprised they played it even shorter than the studio version with shorter versions of Magnu, Opa Loka and others. These are great songs for the band to jam and space out but they didn’t at all and infact there were no 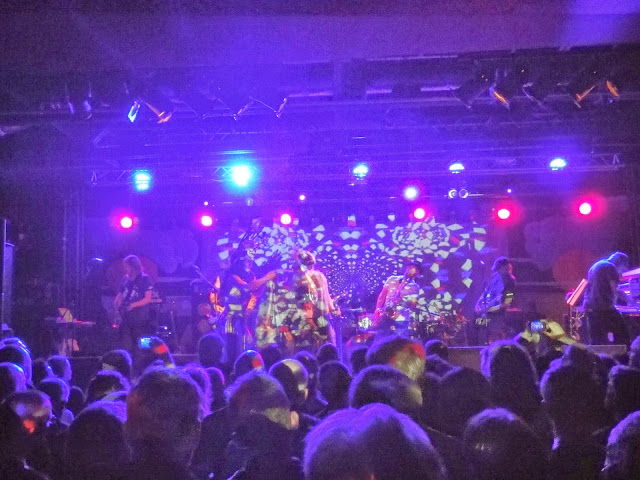 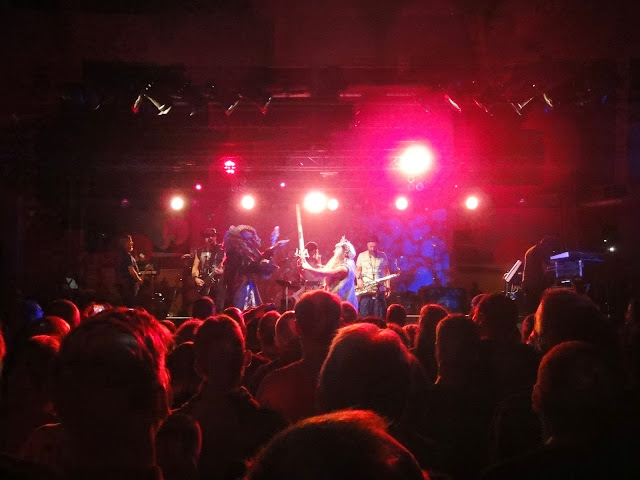 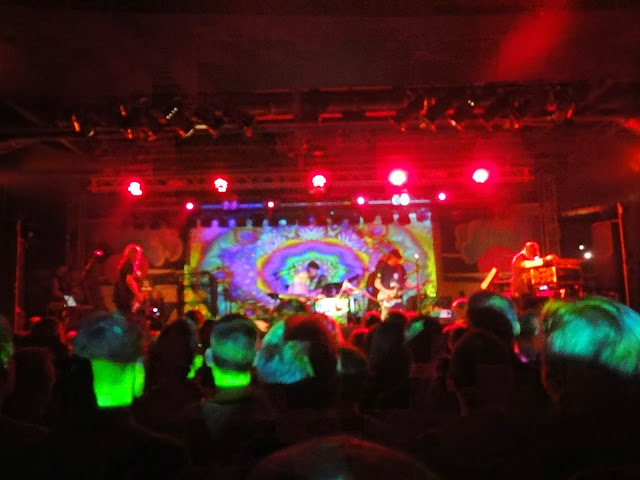 guitar solos yet in this concert. The beautiful one that is usually in the Goldn void that Dave plays was replaced with a short sax solo! Kings of Speed was so fantastic to hear live and they all had a fun time playing it. If I have one complaint besides the jamming is that Dave hardly sings anything and when he does, Dibs voice is also singing and much louder than Dave. Since Dave is taking a lot of breaks and hardly singing, he has been sort of sidelined, almost. Sentinel, also from Onward, and then into Silver Machine with Richard singing lead. Two more from Astounding sounds (Reefer Madness and Assassins of Allah, with a long electronic section). The show ended with a new version of Utopia (the only song they played from the 80s (with no songs being played from the bands catalog from (1985-2012). The show ended with Seasons (also from Onward and also on the new Spacehawks CD). Great concert. Hawkwind still kicks some ass live and provides a great visual and musical show.

The Awakening, Master of the Universe, Steppenwolf, The Hills Have Ears, Southern Cross, Assault and Battery>The Golden Void, The Wizard Blew His Horn, Opa-Loka, The Demented Man, Magnu, Standing at the Edge, Spiral Galaxy 28948, Warrior On The Edge, Kings of Speed, Sentinel, Silver Machine, Reefer Madness, Assassins of Allah Encore: Utopia, Seasons
Posted by Scott aka. Dr. Space at 10:37 AM