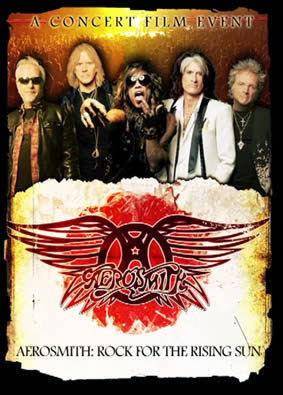 Aerosmith is one of the bands that I grew up listening to in the early 70s and I have a real soft spot for the bands early albums and they play mostly that material to this day. I think this must be one of the few bands from the 70s that play mostly improvised and jamming on every single song (on this tour!). On this DVD they rarely play a single song like the records, every song is played with long guitar solos, having fun, not worried about being super tight.  This concert opens with Draw the Line (1977) and they are just jamming.. Love in an Elevator, while having a very poppy chorus has a pretty heavy riff and both Joe and Brad just do great and pretty long solo sections. I skipped Livin’ on the Edge but Hangman Jury was played even though they did not rehearse it and they mix in some backstage banter about Steven wanting to play it even though they did not rehearse it. Throughout the DVD they mix in some backstage banter, pics and interviews of the band in and around Japan, etc. between most songs. All but a few of the songs are shown completely.  No More no More, Mama Kin, Toys in the Attic… every song just jammed out all the time.  I got the Japanese version from my friend Hatsumi and it is well worth it with nearly 30mins of extra songs (One Way Street, Lord of the Thighs (Best song on the DVD with a great long Brad Whitford solo), Train kept a Rollin’ and Lick n’ Promise!). I don’t think there is another band from this era that plays so much early material and just jams out every single song and not just sticking to the formula.  Which bands still play 3-4 songs from their first record? Not UFO, Scorpions, ZZTop, Deep Purple, none… Great DVD… A huge surprise and I had not expected it to be that good.