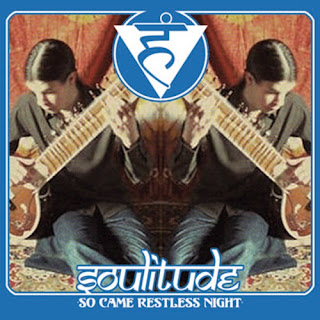 Solitude is the solo project of Christian Peters (Samsara Blues Experiment). This CD was originally released as a CD-R in limited numbers in 2009 but is now out in 500 CDs. It features 9 tracks with limited drums or percussion of cool guitar, sitar space outs. Morninghope is a  long and well developed track with lots of cool layers of spaced out sounds and melodic guitars. Awakening is one of the relaxing sitar ragas. I really like the Albatross with the deep bass drone, mandolin, and beautiful acoustic guitar. Ballad of the Black Swan brings the sitar back and is one of the longer tracks with some very cool spaced out parts. This reminds me a bit of one of the pieces on my own, West, Space and Love LP.  Farwell to Elisabeth is a longer piece where the synth drone plays a major role in the song while he plays beautiful guitar over the top. Voices of the Forest is primarily acoustic guitar but some synth layers float in. I like the echo effect, it makes it quite psychedelic. All that’s left Behind ends this very cool record and is a short piece and the only one with vocals. Lovely record. Fans of Lamp of the Universe will probably like this one.

http://www.electricmagic.de/
Posted by Scott aka. Dr. Space at 8:12 AM