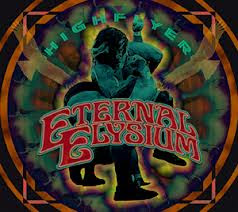 This was a Japanese only release by the cool psychedelic rock band, Eternal Elysium. I had my good friend Hatsumi send it to me. Highflyer" is the theme for Shinya Ishikawa (from Big Japan Pro Wrestling), which I think is pretty cool. Anyway, the EP is only released in Japan for now and will eventually come out on vinyl with some extra material. High Flyer is the opening track. It starts with a riff a lot like Immigrant Song by Led Zeppelin but then goes in a different direction when the singing kicks in. Heavy and intense and later the saxophone and trumpet kicks in to make it a bit more psychedelic. Map is sung in Japanese and a bit more melodic but still it has a pretty heavy guitar riff and the occasional slide guitar as well. Tana, the female bass player also sings a little at the end. Circulation is next and this was also on the 10” with Sardonis but it might be a slightly different version here? A really cool psychedelic guitar solo is unleashed as this track really kicks ass. Heavy intense stoned doomy track. High Flyer- Down not Out ends the CD. This is not at all just a reprises of the first track. It is really cool and experimental with piano, trumpet, sax and not much guitar at all.

http://www.cornucopiarecords.com/ee/
Posted by Scott aka. Dr. Space at 5:46 AM